In order to carry out a ventilated façades, architects and constructors demand materials that not only have aesthetic characteristics, but also, that they cover technical requirements. The natural stone ventilated façades systems, in addition to be very durable, contributes to reduce energy costs and empowers the buildings’ habitability due to its insolating properties. 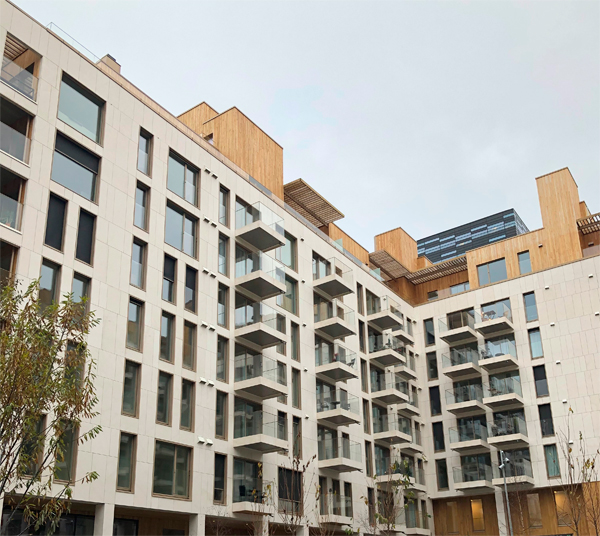 In this apartment’s building, which is located in the financial district of Oslo, Norway, a Blanco Macael marble ventilated façade of 4,000 squares meters has been installed. It has been made with sandy finish and pieces of 210x150x3 centimeters. The objective of the ambitious project was to exploit the chimney effect to the fullest, which is one of the main claims of this advantageous construction system.

This aspect, together with the use of the Macael’s (Almería) local stone, solves the extreme temperatures, humidity, and noise problems. The structure of the natural stone ventilated façades consist in three parts: a stone exterior layer, followed by an air camera that separates it from the building’s interior cover. The advantage of this system is the concentrated air in between of the two layers, which in winter, gets hot and maintains the interior room protected from the cold, and in summer, it guards it from the heat and makes it cooler. This involves an important energy saving, mainly, in
changing and extreme temperatures areas. Furthermore, this type of structure is also a humidity and noise pollution solution thanks to its insulating properties.

Natural stone acts in this project as an element that adds a lot of value to this type of exterior cladding. In this case, the use of Blanco Macael marble, characterized by its low porosity coefficient, promotes the façade durability and also resists high pressures caused by the wind and the material’s weight. Technically, the lack of fracture lines and mass homogeneity help the use of both, linear and point anchors.