Macael Awards 2018 event, setting of the business cooperation, commitment and innovation of the Spanish Marble Industry

Macael, November 16, 2018.- The Spanish Marble Industry of Macael looks at the world and vice versa, and the Macael Awards, ratify it, once again. The XXXII edition of the Marble Awards event, held on Friday, November 16, has been  the best scenario to show that “internationalization is a fact in Macael, it is a challenge achieved by the companies of our industry that, once again, have been able to adapt to the demands of today and lay the foundations of tomorrow”, as pointed Antonio Sánchez, AEMA president, during the speech that closed an edition in which, over again, the innovation of companies has been evident and “the representatives of the most prestigious projects at national and international level, have been present”.

Among the more than 400 attendants, was the Minister of Culture of the Government of Spain, Mr. José Guirao, who together with Gabriel Amat, president of the Diputación de Almería, has collected the Institution Award, a joint prize for both Administrations, granted for the rehabilitation of the Provincial Hospital of Almeria that, with the financial support of the Ministry of Public Works of the Spanish Government, will become a high level cultural center, made in Macael Marbles.

This edition is also the fourth consecutive and the last of the current AEMA president, who, in September 2019, will finish his term. “We believe that we have complied,” said the CEO, ” the objective of giving prestige, promotion, recognition and value to all those people and institutions that have trusted in Macael and its companies, allowing our industry to be better and more competitive and achieving , in addition, that the Macael Brand be spread around the world.” 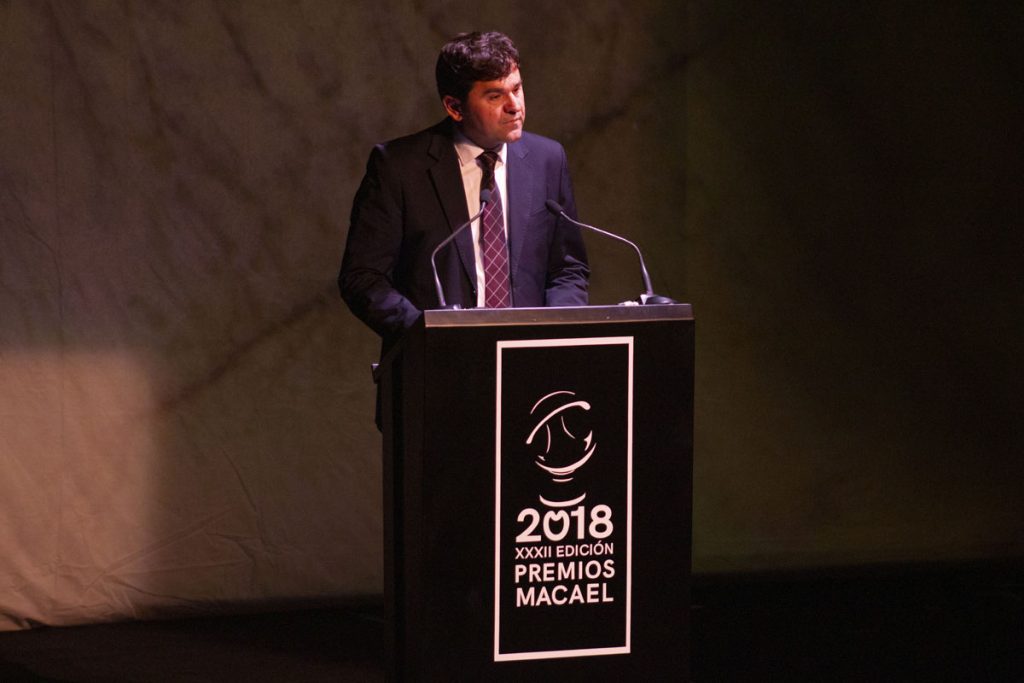 Design, art, culture, innovation, teamwork and productive capacity, basic ingredients of the Macael Awards night and the day-to-day of the Spanish marble industry “get into our companies through their projects – those of the awardees – and, being part of them, makes us better too, “said Sanchez, at the same time he congratulated the winners and thanked them for their trust in the companies and the Macael Marble Brand.

In addition to them, have been present, among many other personalities, the Delegate of the Government of Spain in Andalusia, Alfonso Rodríguez, the Employment, Business and Trade Counselor, Javier Carnero, the Development Counselor, Felipe López and the Agriculture counselor, Rodrigo Sánchez, as well as the participants of the IX International Meeting of the Stone, organized by Extenda-Andalusian Agency for Foreign Promotion and which, once again, coincided with the celebration of the Macael Awards. In this edition, the participants came from the United Arab Emirates, Mexico, Germany, Kazakhstan and the United States.

The event was based on ​​the film ‘2001: A space odyssey’ and included a video mapping show in which integrated dancers and violins represented the development of the humanity through the use of marble. In addition, once the awards ceremony was over, the premiere of the audiovisual composition ‘Cantera de las estrellas’ (Quarry of the starts), a tribute to the Macael quarries, integrated by the photographic report of the photographers Carlos de Paz and Francisco Villegas, the symphonic poem by Juan Cruz Guevara, from Macael and the video format of José Jiménez. A selection of these images was displayed at the entrance of the building where the event was held, which was, again, broadcast ‘in streaming’. Facebook, Twitter, Instagram and YouTube were and will showcase the best moments of the night. A night that is made possible thanks to its sponsors “who believe in us and in our future, making this event possible, at the same time as giving coverage and day-to-day service to our companies”. They are: COSENTINO, DIPUTACIÓN DE ALMERÍA, BANCO SANTANDER, TENAX, BRETON, SACMI, OMAR, CAIXA, CAJAMAR, WILLIS, ASHLAND, UNICAJA, COLOROBBIA, GMM, ITALDIAMANT, MASER, TYROLITY, COMANDULI, BANKIA, BANCA MARCH, DIAMANT BOART, FOCUS PIEDRA, OLUCARPA, SUIMASA, PUERTO DE ALMERÍA, FUNDACIÓN BAHÍA ALMERIPORT, AXA XL, TARGOBANK.