First level Awardees in the big night of the Marble Industry in Andalusia, endorse a year of great challenges overcome

Spain, November 17, 2017.- The Macael Awards returns, the great night of the Marble Industry in Andalusia. “A XXXI edition that demonstrates the robustness and strength of our companies to face, one more year, the great challenges”. This is how Antonio Sánchez, president of the Association of the Marble Industry in Andalusia, organizer of the event, began his speech at the gala held last night on November 17, in Macael (Almería). The president, also, took the opportunity to convey to the awardees the congratulations from their Majesties the King and Queen of Spain, who, as they had requested and “for agenda items, have not been able to attend the event, as was their initial desire”.

This new edition, has had first-level awardees. All of them represent “a clear example of the ability to collaborate, to give new ideas, other points of view that provide different visions”. For Sánchez, “the effective collaboration between promoter, architect, artist, designer, communicator, constructor and manufacturer of marble, has made it possible for us today to present several of the best marble projects around the world.” 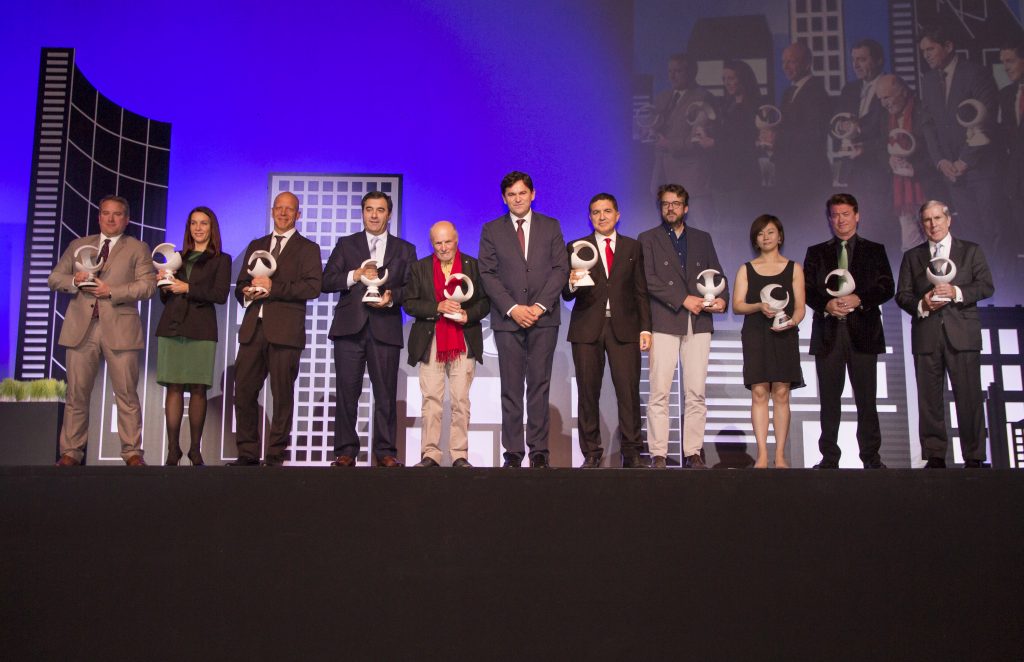 Awardees holding their prizes with the AEMA’s President, Antonio Sánchez, at the event scenario.

The act was attended, among more than 400 attendees, the participants of the ‘VIII Encuentro Internacional de la Piedra’ (International Meeting of the Stone), organized by Extenda Agency, and which, once again, coincided with the celebration of the Macael Awards. It is worth noting that, in this edition, the agents from Kazakhstan, Russia, the United Arab Emirates, the United Kingdom and the United States, who have come to know the Andalusian Sector offer and held meetings with 20 companies, 18 of them from the Marble Region, are of a high prestige, a fact that has been achieved, mainly, by the Macael Brand official presentation event at the Metropolitan Museum of Art of New York last June, organized by AEMA and Extenda Agency.

Throughout his speech, the president, did not want to miss “one of the biggest problems with which companies are currently: the times of the different public administrations”, which mean “a ballast, a brake”, and recalled that the Third Strategic Plan of the Sector launched together with the Andalusian Administration, which began “very agile”, still has pending conclusions and even it has some that have not been reached. “All of them established in an unconsolidated draft”. He urged, therefore, to “continue working on this Strategic Plan begun, under the premise that it must be alive, that we must set objectives and establish a timetable”.

However, he said, the industry will continue working to improve, but “we should not go alone, the involvement of the administration should be continuous, realistic and setting goals according to real possibilities”.

And as a sector that reinvents itself and knows how to innovate, the act, presented for the second year by the journalist Isabel Jiménez, has had a completely transgressive character. Digitization, innovation and internationalization became other undisputed protagonists of the night. The objective was to convey that, through these concepts, marble companies are being able to position themselves in international markets and adapt to the new challenges of society.

Large silhouettes of the different awarded works occupied the room so that the guests could take photos with them, a stage with different representations of buildings, a video that graphically showed the immersion of companies in the digital space and a ‘flashmob’ show, with dancers dressed in costume and vibrant music, filled the room with energy and surprised the audience.

Also, the event, in the constant bet on the diffusion, was broadcast ‘in streaming’. Social networks Facebook, Twitter, Instagram and YouTube were and will showcase of the night best moments. A night that is made possible thanks to its sponsors, “tireless collaborators of our Sector. Daily support in the manufacturing and management processes that help us make our products better”, in the words of Antonio Sánchez, who thanked all of them: