The Kings of Spain inaugurated today the biennial event under the theme ‘Change of Climate’ which have been awarded 10 scholarships, called Macael, to assist architecture students.

The Foundation ‘Marca Macael’ is, once more, one of the sponsors of the IV International Congress of Architecture in Pamplona under the theme ‘Change of Climate’, organized by Foundation ‘Arquitectura y Sociedad’, cultural and private institution, whose interest is to promote architecture in a field more related to life in society than the purely architectural sense.

The economic contribution of the sponsor has been designated to the concession of 10 scholarships, called Macael, for architecture students from Madrid and Pamplona schools.

The Congress, celebrated in Pamplona every two years, has been inaugurated today for the Kings Felipe and Letizia and ends next Friday, July 1. During the three days, Macael will appear as sponsor in all the conferences, meetings, publications and activities developed. In addition, it will deliver to the 500 participants promotional information about materials Macael, its different textures and applications, international and national projects in marble, advances in the industry and machinery, as well as a summary of some of the editions of the Macael Awards (‘Premios Macael’), among others.

The event, which began in 2010 with the objective of becoming an international benchmark, celebrates its fourth edition and brings together important architects like Rem Koolhaas and Pierre de Meuron, for the opening conference, Winy Maas, Bjarke Ingels, Jean-Philippe Vassal, Louisa Hutton, Renata Sentkiewicz and Inñaki Ávalos, who will examine, along with other professionals, the transformation in the world of architecture and its importance to face the climate change.

The participation of Foundation ‘Marca Macael’ in this congress, come to reinforce its work to get greater knowledge of know-how that Marca Macael has fortunately, through it human capital, be able to provide architectural solutions to a project, any size and difficulty. 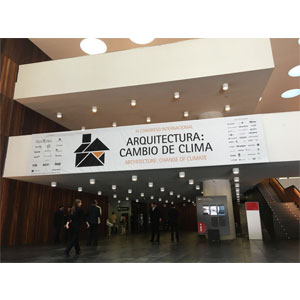